Still standing after all these years

A. Burchardt visits a thousand-year old treasure of Cheltenham

Text and photos ©  A. Burchardt

Between the back of the Cheltenham museum and the High Street there is a little patch of green where pigeons hold court among ancient weather-beaten gravestones. It is a short cut between Clarence Street and the High Street. Few pay attention to the church that stands in this forgotten island. St. Mary’s Church is the oldest medieval building in town.

Records show that this site was a place of worship in the 8th century. No other church in town can boast such perfect collection of stained glass windows, with the exception of Gloucester cathedral and Tewkesbury Abbey. But St. Mary’s is no cathedral. It is small, squat and chunky. A wealthy Norman nobleman owned the building and the land until 1133. Then it was transferred to the Augustinians of Cirencester Abbey who built the buttresses and the impressive arches. Soon it had to be enlarged to allow people from the surroundings to attend services and festivals. Just fifty years earlier, when only men were counted, 114 adult males were recorded in the town. Many probably worked in the five mills along the river Chelt. But they had families, so a lot of people must have taken part in Cheltenham’s religious life.

Medieval carved stone arch, possibly a former entrance from a time when the floor level was much lower than it is today

As all churches St.Mary’s was built over a long period. The spire was added in the 13th century. There is a spectacular stained glass rose at one end of the church. It’s tracery was sculpted by master craftsmen in the 14th century and has survived wars and the ravages of the weather for seven hundred years.

The church was also a place of learning for the poor. Most people have heard of Pate’s Grammar School, but few know that it had its beginnings in St.Mary’s church around the 1540s when Edward VI was king.

In the nick of time

Not long ago St.Mary’s had fallen into disfavour, seen as too traditional, without the now fashionable multi-purpose rooms to attract a modern congregation. It was threatened with closure which would have meant that its important heritage would never be seen again. All was doom and gloom until a group of indignant volunteers swung into action. They are the Friends of St.Mary’s Church. They knew only too well how quickly an unused building deteriorates. They fought for St.Mary’s survival and committed themselves to preserving the building. This is no small matter – the stone work and a vast number of stained glass windows need specialist care.

A while ago I spoke to Christine Ormorod who is secretary of the Friends of St.Mary’s. I asked her about the spectacular windows.

‘In 1850 the church was declared unsafe; it was going to be closed and would have become derelict,’ Christine told me. ‘But the town’s people got together and donated money for these windows which are real works of art. 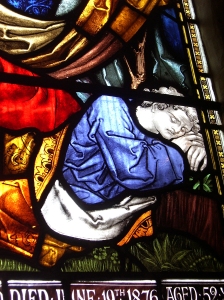 ‘So who pays to keep the church open now?’

‘We have volunteer church watchers. It is open every day from 11-3pm and Saturday from 10-12. We had a  Flower Festivals which coincided with the Music Festival, so that was a big occasion.’

When I went to the church to take photographs I met Mike Tesdale from Bristol Stained Glass who is a specialists in the restoration of stained glass windows. ‘We’ve had to remake two small sections of this window,’ he said. ‘Vandals had pierced it with a sharp tool from the outside. We had to remove the broken pieces, tape them together to copy them in our Bristol workshop. We had to draw and repaint it onto glass of the same type and quality as the original and fire it in a kiln.’ The new pieces are an exact copy. ‘How can someone take so much trouble to break a beautiful thing, ’Mike says sadly. ‘Even a small job like this costs £300.’

Mike Tesdale and his partners are the best people in the land to look after St.Mary’s church windows. In the past they have restored windows in Gloucester cathedral and it doesn’t get any better than that.

On his arrival in Cheltenham the Reverend-Canon Andrew Dow, aware that he was now responsible for a real treasure, has been hard at work to return St.Mary’s to the people of Cheltenham. During the week there is a small service at 12.30 and Sunday services are held too. St.Mary’s Church can be visited from 11-3pm, Monday to Friday and from 10-12 o’clock on Saturday. The Friends of St.Mary’s have about 200 members. Anyone can join for a tiny membership fee. It’s a small price to pay for one thousand years of absolute beauty.

P.S. Since this article appeared there has been a change of heart about the church which not long ago was perceived as ‘too old fashioned’.